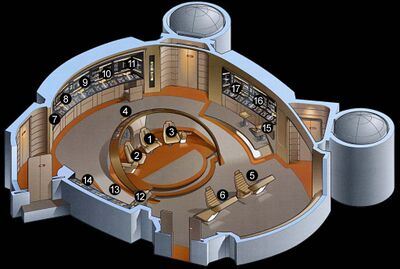 The Bridge is the starship equivalent of an operations center and is generally located near the top and front of a vessel. From here, the Commanding Officer supervises the entire ship's operation, ranging from vessel course control to tactical systems.

On Starfleet starships, the bridge is usually located on Deck 1, on top of the vessel's primary hull. The bridge is the nerve-center of every starship, and it is manned by the top officers of each department. From here, the Commanding Officer supervises the entire ship's operation. When seated in the command chair, typically located in the center of the room, the commander has visual access to all major personnel stations and viewscreens, facilitating the decision-making process. By the mid-24th century, it has become standard that a first officer is assigned to assist a ship's captain in this process.

The forward bulkhead of the bridge is typically dominated by the main viewscreen. Directly in front of this is usually the Flight Control Officer, from where navigation and vessel course control are carried out. Many of the supportive stations that were present on 23rd century bridges were combined into one by the 24th century; that of the Operations Officer. Some bridges feature the operations console alongside the helm station, from where the officer on duty has access to internal systems control, communications, sensor systems, resource scheduling and hardware and system usage. Still, each bridge typically features supportive consoles for engineering, gravity control, damage control, environmental engineering, science and library computer, and internal security, most of these not being necessarily manned under normal circumstances.

Most bridges on Starfleet vessels are replaceable modules, so that adaptation to special missions or upgrading the ship is facilitated.

The bridge command stations provide seating and information displays for the commanding officer and one or two other officers, typically including the Executive Officer. The command chairs are located in the center of the bridge, designed to maximize interaction with all key bridge personnel, while permitting an unobstructed view of the main viewscreen.

Typically, the armrests of the captain's chair feature miniaturized status displays. Upon keyboard or vocal command, the captain can use these controls to override the basic operation of the starship.

The 24th century Flight Control position evolved from the 23rd century helm and navigation positions. Also referred to as Conn, the officer manning the Flight Control console is responsible for the actual piloting and navigation of the starship. Despite many of these functions being heavily automated, their criticality demands a humanoid officer to oversee these operations at all times.

During spaceflight at impulse, Conn is responsible for monitoring relativistic effects as well as inertial damping system status. When travelling at warp speed, Conn is required to monitor the subspace field geometry in parallel with the Engineering department. During warp flight, the Conn console continually updates long-range sensor data and makes automatic course corrections to adjust for minor variations in the density of the interstellar medium.

Many shipboard operations involve scheduling resources or hardware that affect a number of department. In many such cases, it is common for various operations to present conflicting requirements. It is the responsibility of the Operations Officer to coordinate such activities so that mission goals are not jeopardized.

The operations position (also known simply as "Ops") evolved from older 23rd century positions. The bulk of the duties held by the helm and navigation positions were combined into the Conn position. Other functions of the helm panel, such as internal systems control, became the purview of Ops, as have some communications and sensor system usages.

The Ops panel presents the operations officer with a continually updates list of current major shipboard activities. This list permits Ops to set priorities and allocate resources among current operations. This is especially critical in cases where two or more requests require the use of the same equipment, entail mutually exclusive mission profiles, or involve some unusual safety or tactical considerations. During away team missions or emergency situations, the Ops station is supported by the Science station, found at the rear of the bridge in Galaxy class designs.

The bridge station dedicated to defensive systems control and starship internal security is Tactical. Parts of the default control layout presents the security officer with information readouts dealing with the internal protection of the starship and its crew. Besides, a wide variety of starship defensive systems are available to the Tactical Officer (sometimes doubling as Security Officer), ranging from the defensive shields to the phaser and torpedo systems.

Other systems that may be commanded by Tactical include long- and short-range sensor arrays, sensor probes, message buoys, and tractor beam devices.

Every Starfleet bridge also includes several supportive consoles and backup stations. These may include consoles for Planetary sciences, Engineering, Mission Ops and Environmental Control. Most of these are meant to relieve the senior bridge officers of secondary duties during alert and crisis situations.

The Environmental Control console provides similar relief to the operations manager, monitoring the starship's life support systems. Due to the highly automated nature of these systems, this console would be unattended under normal circumstances, but becomes of crucial importance during alert situations to maximize crew survivability.