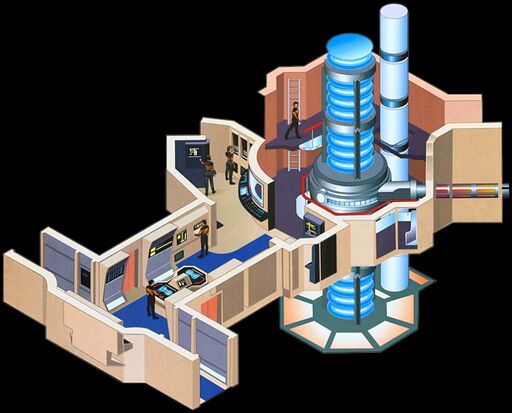 Engineering or Main Engineering is usually located in a starship's secondary hull, from where the ship's main power systems are controlled. The most notable exceptions to this placement are the NX and Constitution class starships, where Main Engineering was located at the back of the saucer section.

Engineering's primary purpose is to be the central point for control of all engineering systems aboard a starship, especially those related to propulsion and power generation. The matter/antimatter reaction chamber is located in Engineering.

For starship designs after the 23rd century, Engineering can be turned into a command and control center by converting a number of consoles to duplicate the stations on the bridge. The software is already preloaded onto these consoles and each vessel has specific procedures in place in case a situation warrants.

24th century starships featured a more modern approach to the Engineering facility. Aboard the Galaxy class starship, Engineering was an open-plan facility, directly accessible from the corridor. Consisting of two levels, it housed the starship's warp core and primary engineering support systems.

The corridor bulkhead housed the master systems display. Inside the main section, the master systems display was the operational focus of the room. Beyond this, heading towards the warp core, the Chief Engineer's office and several support consoles were located on the left, and the Assistant Chief Engineer's console on the right. These formed part of the bulkhead protecting the main part of Engineering from the warp core. Access to the upper level, a circular area surrounding the warp core, could be found by a ladder on the left of the core or an elevator on the right.