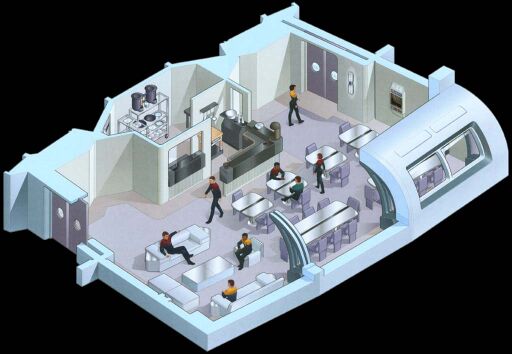 A Mess Hall (also known as a "mess deck" or "chow hall" in Marine slang) is a place aboard a ship or station where personnel gather to eat and socialize. The size of a mess hall is usually based on the size of a ship's compliment and in some cases there may be more than one. A typical one can be found here. The practice of segregating the dining arrangements into Enlisted and Officer's Mess is still used in some cases, although current Starfleet practice is to encourage more interaction between all ranks.

A ship or station's Commanding Officer may also request his or her own mess, usually referred to as the Captain's Dining Room.

Mess halls comprise both food replicators and in larger vessels, actual prepared meals typically served in a buffet-style arrangement. They are open and manned around the clock, ready to serve all shifts. On occassion, they may be temporarily closed so the hall can host a particular function. They serve assigned personnel, civilians, and guests alike. Mess halls can be converted into triage areas or emergency shelters as needed.

Up into the 23rd Century, Starfleet personnel comprised the mess staff (including the accompanying Galley) but this was replaced by private civilian contractors. Mess halls are allowed a certain amount of storage area in the Cargo Bays, but most foodstuffs are replicated or grown in various hydroponic or Airponics Bays.