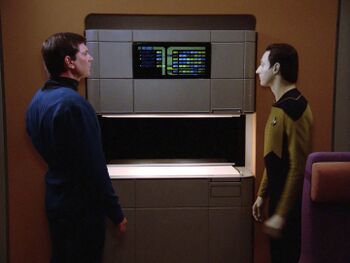 Sliced bread was, apparently, the best thing for quite some time but what about the technology that could create sliced bread from stored energy? Identical to the transporter in many respects, though not as fussy about molecular-level errors, the replicator can dematerialise or materialise objects. It is not, however, fitted with molecular imaging scanners, instead relying on stored patterns to determine to create objects and a quantum geometry transformational matrix to to modify the matter stream of dematerialised objects. A replicator ususally consists of a computational section and a rematerialising unit. Replicators can serve as waste receptacles.

Replicators require two things to operate, the first is "raw materials" which, in a food replicator may be as simple as basic molecules or in a more advanced industrial replicator, a complex array of atoms may be required. The Replicator takes raw atoms and assembles them into a pre-ordained pattern, creating in the end result the desired product. The Waste reclamation function on a Replicator and a Starship's Waste Reclamation facility both serve as the primary method of providing these, with the Bussard ramscoop also providing a small number , with special storage receptacles and cargo bays providing for the storage of more complex atoms which are less commonly used in replication.

The second thing is energy. While most replications are usually relatively low in terms of power usage, usually able to be provided for by a Starship's Fusion Reactor, however many more complex replications can require vast amount of energy and can be extremely time consuming, some are so power intensive that they are not able to be performed on many Starships.

The Operations Department maintains, programs and repairs replicators as needed.

There are a number of type of Replicator, listed below:

The Starfleet Portable Micro-Replicator (PMR) is a highly versatile and compact technology designed to provide in the field production of small food items. Whilst it can be used to produce some products, doing so is not advisable and it's relatively small size makes it a poor replicator for doing so.

The PMR is primarily used by Starfleet and Marine forces which are operating independently of a starship, usually to produce beverages and combat rations and is often combined with a portable power source to enable long term in the field use. The unit is relatively light and easily enables units to reduce the amount they have to carry as food can be replicated in the field as they operate.

The standard Mark 6 Food Replication Unit is a staple of both Starfleet and Federation food provision. Widely used, highly power efficient and extremely useful, the Mark 6 comes with a preprogrammed memory core with hundreds of thousands of beverages and meals, as well as the ability to create raw materials. The Mark 6 can also be used to produce small non-organic products, usually of a household nature, from plates and bowls to vases, teddy bears and clothing.

The Mark 6 is usually either powered off of Starfleet's power transfer systems if on a Starbase, Starship or Colony, or if on an established civilian settlement, then off of the local power grid. The power requirements are relatively low and the quality of food it produces is extremely high. This combined with a simple user interface which enables the easy programming of new replication patterns and an easily expandable memory core, enabling saved replication patterns to be transferred with ease utilising a standard iso-linear data rod or PADD. 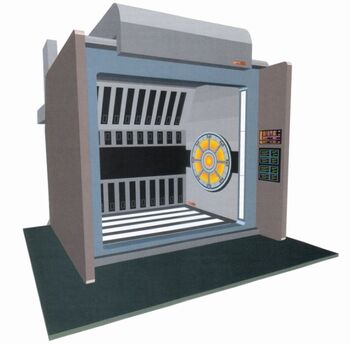 The Type 5 Industrial Replicator, also known as the Light Industrial Replication Unit (LIRU) is a staple of Federation industrial and Starfleet production capacity. Within Starfleet, the Type 5 is used primarily aboard Starships for the production of small parts, most tools and can even be used to produce weapons, including most TR series personal infantry weapons. In civilian circles, the Type 5 is used for most light industrial applications, being used to mass produce a whole range of consumer goods, from clothing to kitchen utensils.

The Type 5 is also a critical component in most electronics production, as her small size enables her to produce most components making her a staple of many Federation industries other than the Light Commercial goods sectors. Starfleet vessels all carry at least 3 Type 5 Replicators (Defiant, Hornet and Wallace class) with some carrying as many as 60 (Vikrant, Normandy, Sovereign and Excalibur class) and many larger runabouts also carry the Type 5, to enable longer term operation and even in extreme circumstances minor parts to be replaced.

The Type 4 Industrial Replicator is a larger version of the Type 5 Replicator, designed for Light or Medium Industrial Production, but unlike the Type 5, this replicator is designed primarily for the civilian and export markets, enabling it to become one of the many staples of the Federation's Trans-stellar trade and a common sight throughout the Alpha and Beta Quadrants.

The Type 4 Industrial Replicator can produce articles up to 15m cubed within it's chamber, and it is tailored primarily to be utilized for non-organic material production. The Type 4 is also highly power efficient, leading it to be a classic workhorse of the Federation and many other less developed economies. In the past the Type 4 has even been used to stimulate a planets industrial production after a major catastrophe, including Bajor after the Occupation ended and Cardassia Prime after the Klingon-Cardassian War of 2372.

The Type 3 Industrial Replicator is defined as a Medium Industrial unit, but it has been designed primarily for usage aboard a Starship or Starbase, for large parts replication. The Type 3 is usually used for replication of large parts for starships or for shuttle and fighter components. It can also be used to produce items of furniture for Starfleet Officer's quarters.

The Type 3 is usually found on Starships with a dedicated Industrial Replication Centre or a Auxiliary Craft Maintenance Facility, which also happen to be primarily larger vessels and those which carry a large number of auxiliary craft, which are considered to require the ability to repair their Auxiliary craft on the move.

The Type 2 Industrial Replicator is a larger Medium Industrial unit than the Type 3, but whereas the Type 3 has a fixed dimensions which it can produce, the Type 2 is designed to be expandable, enabling it to increase in size up to a cubic area of 40m (using 1m panels). Whilst it is rarely at full size on a Starship or Starbase they are often found at full size on Shipyards or on many Federation worlds in an industrial usage.

The Type 2 is also ideal for the export market, since it is an expandable system, it can be flat packed and easily transported, making it a widely used system, without the Federation primarily by the Ferengi Alliance, who either utilize it themselves or sell it on, further increasing the proliferation of the technology.

The Type 1 Industrial Replicator, is like the Type 2 a variable size, expandable Replication unit designed primarily for Industrial usage. The Type 1 is however geared towards producing highly complex metallic compounds from raw materials, particularly specializing in creating complex alloys or alternate metallic based, multi-element compounds.

This makes the Type 1 a key part of Starship construction, with it's primary usage within Starfleet, the Federation and specialized pre-approved export markets (Usually only those of key allies, including the Klingon Empire) being to create reliable chunks of solid or liquid Duranium Alloys and Composites, which are key in the construction of bulkheads and armour plating. The Type 1 is preferred because many other alloying and composite creation methods, because it produces remarkably few imperfections (less than 0.000001% of total) and since only the atoms of the exact materials are used, it is totally pure.

The Type 1 is found on nearly all Starfleet vessels and starbases, but the unit is usually small, creating only small plates of Hull grade Duranium Alloy which can be used to patch damaged Auxiliary Crafts hulls and even actual starship hulls in extreme circumstances. The process is extremely energy consuming however, with vast amounts of energy needed to create small segments of Duranium alloy, in addition to the raw materials (which must be pre-processed and not bonded to any others) this means that the Type 1 is used only when absolutely needed and when a vessel is not performing any other high power task, such as Warp travel or combat.