Difference between revisions of "Spectral Classification" 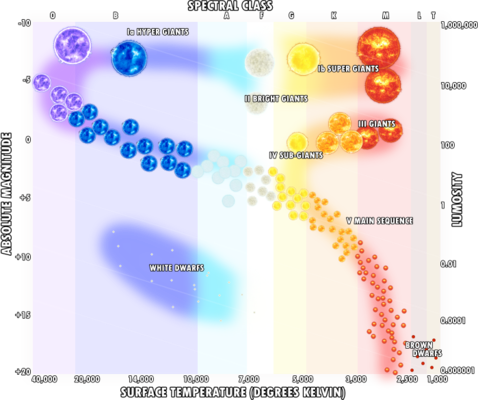 A star (or "sun") is a massive energy-producing sphere of plasma and gas located in space. The region around a star that is held by its gravity, including any planets, moons, comets, and asteroids, is called a star system.

For example, Sol is classified as type G2V. This indicates that is a Spectral Class G star of considerable temperature, and that it is a part of the main sequence.

Class O stars are very hot and extremely luminous, with most of their radiated output in the ultraviolet range. These are the rarest of all main-sequence stars. About 1 in 3,000,000 (0.00003%) of the main-sequence stars in the solar neighborhood are class O stars. Some of the most massive stars lie within this spectral class. Class O stars frequently have complicated surroundings which make measurement of their spectra difficult

Class B stars are very luminous and blue. Their spectra have neutral helium, which are most prominent at the B2 subclass, and moderate hydrogen lines. Ionized metal lines include Mg II and Si II. As O and B stars are so powerful, they only live for a relatively short time. Thus, due to the low probability of kinematic interaction during their lifetime, they do not, and are unable to, stray far from the area in which they were formed.

Class A stars are among the more common naked eye stars, and are white or bluish-white. They have strong hydrogen lines, at a maximum by A0, and also lines of ionized metals (Fe II, Mg II, Si II) at a maximum at A5. The presence of Ca II lines is notably strengthening by this point. About 1 in 160 (0.625%) of the main-sequence stars in the solar neighborhood are class A stars.

Class F stars have strengthening H and K lines of Ca II. Neutral metals (Fe I, Cr I) beginning to gain on ionized metal lines by late F. Their spectra are characterized by the weaker hydrogen lines and ionized metals. Their color is white. About 1 in 33 (3.03%) of the main-sequence stars in the solar neighborhood are class F stars.

Class G stars are probably the best known, if only for the reason that the Sun is of this class. They make up about 7.5%, nearly one in thirteen, of the main-sequence stars in the solar neighborhood.

Most notable are the H and K lines of Ca II, which are most prominent at G2. They have even weaker hydrogen lines than F, but along with the ionized metals, they have neutral metals. There is a prominent spike in the G band of CH molecules. G is host to the "Yellow Evolutionary Void". Supergiant stars often swing between O or B (blue) and K or M (red). While they do this, they do not stay for long in the yellow supergiant G classification as this is an extremely unstable place for a supergiant to be.

Class K stars are orangish stars that are slightly cooler than the Sun. They make up about 12%, nearly one in eight, of the main-sequence stars in the solar neighborhood. There are also giant K-type stars, which range from hypergiants like RW Cephei, to giants and supergiants, such as Arcturus, whereas orange dwarfs, like Alpha Centauri B, are main-sequence stars.

They have extremely weak hydrogen lines, if they are present at all, and mostly neutral metals (Mn I, Fe I, Si I). By late K, molecular bands of titanium oxide become present. There is a suggestion that K Spectrum stars may potentially increase the chances of life developing on orbiting planets that are within the habitable zone.

Although most class M stars are red dwarfs, the class also hosts most giants and some supergiants such as VY Canis Majoris, Antares and Betelgeuse. Furthermore, the late-M group holds hotter brown dwarfs that are above the L spectrum. This is usually in the range of M6.5 to M9.5. The spectrum of a class M star shows lines belonging to oxide molecules, TiO in particular, in the visible and all neutral metals, but absorption lines of hydrogen are usually absent. TiO bands can be strong in class M stars, usually dominating their visible spectrum by about M5. Vanadium monoxide bands become present by late M.

Class L dwarfs get their designation because they are cooler than M stars and L is the remaining letter alphabetically closest to M. Some of these objects have masses large enough to support hydrogen fusion and are therefore stars, but most are of substellar mass and are therefore brown dwarfs. They are a very dark red in color and brightest in infrared. Their atmosphere is cool enough to allow metal hydrides and alkali metals to be prominent in their spectra.

Classes T and L could be more common than all the other classes combined if recent research is accurate. Study of the number of proplyds (protoplanetary discs, clumps of gas in nebulae from which stars and planetary systems are formed) indicates that the number of stars in the galaxy should be several orders of magnitude higher than what was previously speculated. It is theorized that these proplyds are in a race with each other. The first one to form will become a protostar, which are very violent objects and will disrupt other proplyds in the vicinity, stripping them of their gas. The victim proplyds will then probably go on to become main-sequence stars or brown dwarfs of the L and T classes, which are quite invisible to us. Because brown dwarfs can live so long, these smaller bodies accumulate over time.

Images used with permission from http://sttff.net/